Do you procrastinate?  I know I do it more often than I would like to admit.  We all have a tendency to procrastinate.

Very recently, I saw this photo in a LinkedIn post. 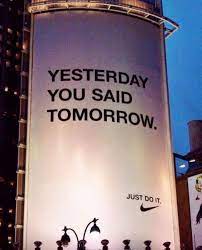 To be legally clear, this is a billboard type advertisement by Nike. They are very famous for their "Just Do It" slogan.   Now they have two and they have combined both into an even more powerful expression.

The definition of "procrastinate" from the Oxford dictionary is: "to delay or postpone action; put off doing something."  It is like the old colloquialism "Manana."  Mañana is tomorrow in Spanish.  We all do it to one degree or another.

From a business perspective, to procrastinate is a terrible situation if you or a great many people in a company or organization do it.  If it occurs too often or too much, then what does it do:  it has the probability to DELAY MOST EVERYTHING.  Is that what you really want?  No, I doubt it.  It very well may hurt you, your colleagues, your company and your organization through lower revenues, lower profit, delayed shipments, etc., etc.

One survey said that 15-20% of adults regularly procrastinate.  In one study, it was reported that 88% of those surveyed said they procrastinate for at least 1 hour daily.  In a typical company of about 300 people, let's figure out the lost time attributable to procrastination.  300 people (x) 1 Hour (x) 5 days a week (x) 48 (allowing for vacation time and holidays) (x) .88 (procrastination % from study) equals 63,360 hours lost annually because of procrastination.  Can you and your company afford that?  No, that's what I thought.

Even as a semi-retired person I try my very best to have a daily list of actions I need to deal with on a given day.  What I do not do often enough is prioritize them.  If I did, I believe my level of procrastination would drop significantly,  Typically most people will likely procrastinate on that most important one.  The one they should do their best to "Just Do It."

So when you make a commitment, 'JUST DO IT."

When you decide this is something you want or need to do, "JUST DO IT."

Popular posts from this blog

By Bob Jacobson, MPS, CSBC July 07, 2021
I have over four decades of experience with easily over one thousand CEO's/Managing Directors around the world.  I have witnessed some who were the best of the best, others who were less stellar and the vast majority at various stages in-between.  This is the story of one of the best.  Read the article from the Wall Street Journal by Hubert Joly  of how he became and then handled the role of CEO at Best Buy.  For those unfamiliar with Best Buy, it is probably the largest consumer electronics retailer in the USA. With roughly more than 800 stores and close to 100,000 employees, Best Buy was a big company.  It was in that time period that Best Buy was reeling from ineffective management, lackluster consumer demand, serious online competition and what your will find was a really screwed up IT operation.  Financial analysts were suggesting it should file for bankruptcy  The story is intriguing, readable and fascinating.  It also shows you what a great CEO can do if they want to. One of
Post a Comment
Read more

Listening to the Great Ideas of your Employees!!

By Bob Jacobson, MPS, CSBC February 20, 2012
On Tuesday, February 7, 2012, the Wall Street Journal wsj.com had a great article entitled, "Boeing Teams Speed Up 737 Output."  The link for this article is: http://online.wsj.com/article/SB10001424052970203436904577155204034907744.html?KEYWORDS=David+Kesmodel Boeing Teams Speed Up 737 Output Jet Maker's Innovation Crews Search for Ways to Streamline Production as Aircraft Demand Soars By DAVID KESMODEL RENTON, Wash.—As Boeing Co. strives to lift production of its best-selling 737 jetliner to meet surging airline demand, it is turning to workers like Jay Dohrmann to streamline work. Mr. Dohrmann, a brawny, 46-year-old engineer at the 737 plant here, is part of an extensive effort the company has underway to rally employees for ways to make its jets more efficiently and avoid expanding its factories and its costs. These innovation teams are growing as Boeing seeks to increase output of the narrow-body, workhorse plane by as much as 71%.
Post a Comment
Read more

What are the most In-Demand Skills and Traits that a CEO should have?

By Bob Jacobson, MPS, CSBC October 14, 2022
Recently I have been doing a great deal of research for a Zoom Class that I am doing relative to the CEO role.  Having reviewed literally hundreds of articles, I came up with the following list of Skills and Attributes that all CEO's should theoretically have.  This list came from me and the authors of the various articles I have read.  The compiled list of 23 traits or skills, in no particular order, are: 1)    Active Listening 2)    Empathy 3)    The ability to share messages and make complex ideas understandable to everyone (storytelling). 4)    Strategic Thinking Skills 5)    Creativity 6)    The ability to inspire and convince others. 7)    Flexibility 8)    The ability to turn information into action. 9)    Project planning 10)  System development 11)  The ability to assess an employee's strengths and weaknesses. 12)  Time Management 13)  The ability to build and inspire trust. 14)  Strong communications skills 15)  Positivity 16)  Reliability 17)  Management skills (Fi
Post a Comment
Read more